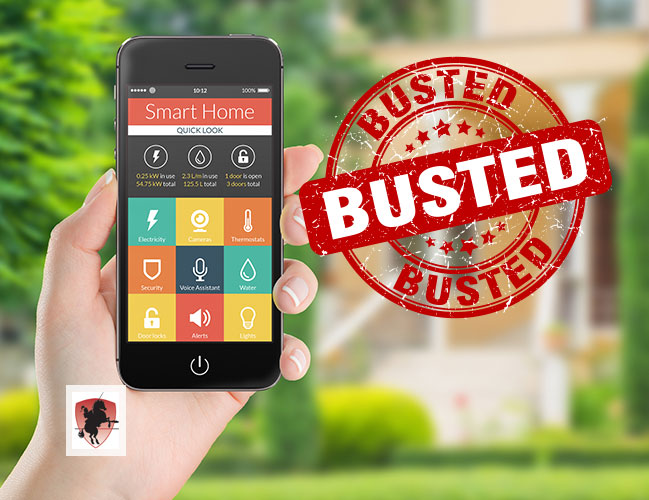 You know, there are some myths that must be busted. It’s just right. After all, we would not want anyone thinking that you can place a bomb in a filing cabinet, dive and survive; and don’t count on an exploding water heater to put out a housefire either. It just isn’t happening. While we choose to believe that a Corvette can be used as a ramp to flip another car into a barrel roll and both cars drive away afterwards, there are some smart home security myths that we couldn’t walk away from without busting.
Here are the top busted myths.

Smart Security is a Gimmick

It never hurts to evaluate technology before opting all in, but this is one myth that is busted for sure. Convenient and techie, yes. Gimmicky, no. Smart technologies are designed to make a lot of processes simpler and you can customize it to meet your needs.

Sure, waiting it out for the second or third version of a new technology makes sense when you are waiting for them to get the kinks out of a buggy version of— just about anything. But smart security and automation technologies aren’t new; they are just vastly improved, more affordable, and able to be widely integrated using commonly used technologies.

This is probably the most widely held misconception. It is probably a holdover from the earliest advent of security and automation technologies when the components making up the systems were not as widely produced so therefore much more expensive. Today, those components are able to be produced much more efficiently and affordably so the entire technology is affordable for nearly every budget.

We’ve all see it–technologies that are all bells and whistles and end up complicating what should be a simple thing. But that’s not smart security. Smart security and automation holds unlimited power to simplify and streamline a multitude of tasks that results in saved time, decreased energy consumption, and better productivity.

Security Systems are Just for Security

The applications for automation and security technologies are actually very wide and go well beyond security or convenience. The technology can be used for improved savings on energy, aiding in the care of sick or disabled family, helping in the care of memory patients, or creating and maintaining a calm environment for loved ones with sensory issues, just to name a few.

While dogs do create a small deterrence, they can’t replace a security system. Dogs can be easily harmed, detained or distracted. They also can’t alert authorities. No, disrespect to man’s best friend, but they are a better security measure when used in conjunction with security technologies.

Follow Us
Keith Maley
President at Knight Security Systems
Knight Security Systems, Inc. is a local, family owned business based in Harrisburg, PA. We specialize in security, fire, camera's, access control systems and other low voltage products for your home or business. We have been in business since 1979.
Follow Us
Latest posts by Keith Maley (see all)
Posted in Home Security and tagged home automation
← Smart and Easy Safety Tools for Living Alone18 Facts That Will Make You Rethink What You Thought You Knew About Burglary →